He walked in smiling and offered to pay for my Starbucks coffee. He said, “We were strangers till I bought you coffee. It was my kind act for the day” as he handed me a card that said Your Turn Now! Meet Rushabh Turakhia, founder of Your Turn Now (YTN). Inspired by the movie “Pay It Forward” (starring Keven Spacey and Helen Hunt which Rushabh’s seen 52 times), he started this movement in December 2009.

The idea behind YTN cards is simple. Do a random, kind act to a stranger and see their smile. Hand over the YTN card and request them to do a similar act for someone else and pass on this card. The more hands the cards change, the more widespread the acts of kindness will be. Gestures can range from helping someone cross the road, carrying heavy bags for someone, treating someone to a cup of coffee and many more. YTN cards aim to trigger a chain of kind acts. He feels that “A kind act need not just be monetary but can also be devoting one’s time to someone”, an idea many of us miss to acknowledge.

While some of us still do these acts without the YTN card, others need that little nudge or something tangible to remind them to do a kind deed.

Rushabh at a kindness workshop

Rushabh’s initial target was to reach 5000 YTN cards in a year, but in the first year itself the count crossed 25,000. Half a million people across 45 countries use YTN cards in 10 international languages. He hopes to target 7.2 billion across the world as he feels all of us are capable of kind acts but often forget in our daily routines. He devotes 4-5 hours a day to promote this movement which is a one man show. Rushabh individually interacts with everyone who asks for cards and reads their emails and messages on how they used them. He travels often to spread awareness about his initiative and encourage acts of kindness in corporate events, schools, colleges and rotary club events. 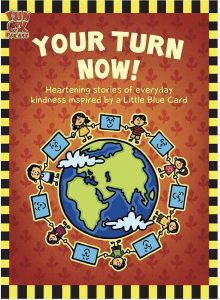 Rushabh is a diamond merchant by profession, self-taught life coach but his passion lies here. He has authored four books, two of which are bestselling books related to Your Turn Now. These two books describe real acts of kindness performed by people around the world. It further perpetuates the idea that there are countless ways to spread kindness. The YTN books were selected by Crossword as “Best of 2013: Children’s Writing” and by Amazon as “Most memorable books of 2016”.

Rushabh also runs two NGO’s besides this, Anybody Can Help that helps with disaster relief initiatives during floods, earthquakes etc. across cities as and when needed and Ahimsa to provide shelter to stray animals. He is also on the board of three other NGO’s.

This is non-profitable and YTN cards are sent by Rushabh world over for free. He was not charged by the person who designed the YTN website and created YTN cards. The person who prints these YTN cards does it at cost price that is recovered from the royalty of the two published books.

So, what inspires Rushabh? He says, “I enjoy interactions with my little friends the most. When I ask them what kindness means, they say the cutest little things, their versions of being good like lowering the TV volume when dad’s on the phone, helping mom set the table etc.”

Rushabh with his son, Vivaan

Recently he celebrated his 40th birthday with 40 acts of kindness along with 40 friends. He stocks up his car with water bottles and chocolates to distribute to people in need whenever he drives around. His family supports this movement and his fourteen year old son, Vivaan joins him for presentations in schools.

Rushabh believes we only leave behind our legacy. We should therefore invest in making a difference to people around us. Every human being is an agent of change. He truly believes that any act of kindness, big or small can have a ripple effect.

Ronald Reagan had once said, “We can’t help everyone, but everyone can help someone.”

Let’s join Rushabh in spreading the ‘Your Turn Now’ philosophy. I have taken 10 cards from him and can’t wait to distribute them.

If you want to take his initiative forward, you can order YTN cards or invite him to conduct a kindness workshop. You can email me at prernawahi@gmail.com or reach him directly at rushabh@yourturnnow.in or +91-9029602897.

4 thoughts on “Your Turn Now!”