Sanya was lost in her own thoughts amidst her friends’ cacophonic chatter. Vir was everything she wanted in her husband. He was perfect for her but she felt that he deserved better. She was unsure what her response would be to his proposal for marriage.

Sanya was the only daughter of a business magnate in the city- born with the proverbial silver spoon in her mouth. She was beautiful, intelligent and successful having founded and leading her own venture independent of her father’s legacy.

Yet, she saw herself as broken.

Deep in her heart, she was insecure. Her mother had left her when she was only five. The nanny had raised Sanya. Her father had little time for her while he was conquering the business world. He had never remarried. She had come to believe her mother had died – an untruth she hoped would lessen her hurt of being abandoned by her own mother. She feared abandonment in her romantic relationships and was always fearful of commitment. Her biggest nightmare was that she would turn into her own mother!

Eventually, when Vir popped the question, she was tentative in her response.

She decided to find out the truth about her mother.

In her room, she had a personal safe which guarded her secrets. She reached into its inner depths and pulled out a bunch of unopened letters. Her mom had written all these years but Sanya had never bothered responding. She was still angry with her mother. On checking the address on the letters, she realized it was in the same city. She decided it was time to confront her past. She drove to the address mentioned on the letters.

As she rang the doorbell, she wasn’t sure how she would begin. Her mother opened the door. Age had left its mark on her face as a river wears down the mountain over time. Sanya tried to find a resemblance to her mother but everyone had always said she looked like her father.

Her mother welcomed her in but Sanya’s impatience took over. “Why did you leave me?” she said directly.

Over a cup of tea, her mother explained, “I did not give you birth.”

She paused then continued, “Your father had an affair and you were the result. I accepted you as my own on the condition that he would mend his ways and we would live as a family. I tried but there was no end to your father’s philandering ways. When the showdown happened, he gave me a choice between staying but accepting the way things were or leaving and never seeing you again. I decided leaving was my best option but I did not want to deny you the rights of being his daughter and the access to the life of privilege you were entitled to. I felt it was in the best interest of all of us to part ways.”

Mother took a sip of her tea and continued “I have been tempted to connect with you all these years but have held back thinking is it worth spoiling your life with these truths of the past? Aren’t the present and your future more important? I know you are planning to marry Vir and I also know you are terrified of commitment much like your father. He made his choices and now it is time you make yours. You may feel love abandoned you one day and you may want to get even by abandoning it today. But think before you make your final decision.”

That night, Sanya met Vir and told him the whole story. With a choked voice, she said, “I don’t know if it is fair to dump this mess on you.” Vir took Sanya into his arms and said, “You were so fearful of being your mother that you turned into your father instead. You want to keep running away from commitment. You have a chance to change that forever. Come grow old with me.”

The next day’s newspapers prominently carried the wedding announcement of Sanya and Vir. 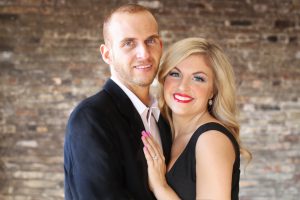 This blog post is part of the blog challenge ‘Blogaberry Dazzle’ hosted by Cindy D’Silva and Noor Anand Chawla, and happily SPONSORED BY RRE Studios and SHOWCASE Events.