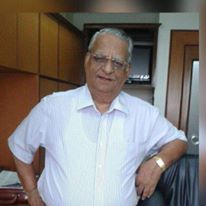 It’s ironic how I’m at loss of words trying to write about the man with many words. Harshie uncle, as we called Captain Harsh Wahi (my father’s elder brother), was known for his verbose anecdotes, lengthy messages, over punctuality and immaculate dressing. He had lots to say and write and never missed an opportunity to do so. I personally was at the receiving end of many of his narratives, thoughts and even feedback on my own writing pieces. He was well planned, thorough and meticulous in his tasks, a quality which I feel I have inherited from him.
He became the head of Wahi family after my grandfather passed away. He was a strong pillar of support when our family lost my most lovable Mallika bua (eldest sibling for my father) and years later my grandmother. He held everyone together and asked us to cherish their memories and be happy that they had such good lives. He took it upon himself to step in when needed, help out everyone even going out of his way. His generous, kind and giving spirit made him a wonderful human being. He truly had a heart of gold. His actions spoke louder than his voice. He touched so many lives. Everyone who knew him had one or the other of these experiences.

He was known in our family for his “surprise” visits. He often, got his own surprise when he found out that everyone was out and he had to wait outside the house for a couple of hours before someone returned. On his last surprise visit, he came to Chennai and had lunch with us. It was a memorable afternoon where we enjoyed authentic south Indian lunch and he got to spend time with Ashwin’s extended family. He had promised a repeat visit minus the surprise element.

He was known for his punctuality. Not just reaching on time but before time, totally the opposite of my dad who arrived at – Delhi standard time – an hour after the invite. I recollect amusing conversations that ensued when both of them had to go together to an event. Harshie uncle would be ready and waiting by the car while my dad would just have got into the shower. Neither of them changed their way but over the years I feel they reached a mutual compromise trying to reach everywhere on time, not before or after. By virtue of this quality, Harshie uncle was always in charge of my cousins Baraats to ensure everything happened on time. We were probably the rare Punjabis whose events progressed on time, thanks to Harshie uncle overseeing all the arrangements. My buas husband (whom I fondly call Ashok jija) pointed out that he was always in a hurry for everything, so much so that he even jumped the line in drawing his last breath.
Harshie uncle enjoyed giving us topics to write essays and then checked them. He also gave us math problems to solve and was interested in our thought process and methodology more than the correct answer. He always encouraged me to write and take that up professionally. He made it a point to read and commented on all my blogs. He himself wrote beautifully and often suggested that I can send him my blogs for editing. I had promised him that the day I can think of a common topic that would interest him as well I will surely seek his input.
He has always been a large part of Prarthna and my lives. Having stayed with us on his Delhi trips we shared many things with him. He was like a father figure for us and always treated my parents and us as his immediate family. I still recall his love for eating out (true foodie) and how he used to ask us for recommendations and then actually share his reviews after trying out our suggested restaurants. He always took pride in our achievements and treated us like his own daughters. Even after we got married our bond continued and he gave the same love to our spouses. He loved Yug immensely and often said his mischief and behaviour reminded him of my father (Harshie uncle’s naughty younger brother). Yesterday, Yug and I went out to find the “Harshie nanu star” and he pointed out to the brightest star in the sky to tell me that’s who he is. I couldn’t help but smile at the correlation with my intellectual, intelligent and brainy uncle.
I’m most glad that my one month old niece, Adaara, gave him a reason to visit Delhi just a few weeks back. She will always remind us of him since she also shares her birthday with him. He said it was the best gift for him. He often related this to my own birthday being shared with my grandfather’s.
The children of the family have come together to write beautiful tributes reminiscing about their interactions with him. They clearly lay out his distinct personality and nature aptly. While Harshie uncle knew how much we all loved and respected him, I wish he could read all these messages for him. And as my Ashok (aka Bilu) uncle believes “These messages are actually getting to him though the medium may have changed.”
My final note to Harshie uncle would be…
Partings come and hearts are broken,
Loved ones go with words unspoken.
Never selfish, always loving and kind,
These are memories you leave behind.
Messages compiled by Harshie uncle’s nieces/nephews –

The first time I met Harshie uncle was at Prerna’s baby shower. It was the first time I was going to meet soon-to-be ‘my extended family’ and I was very nervous (a baniya boy meeting a true Punjabi family so you can imagine the bhangra happening in my stomach).

I reached the venue a couple of hours in advance, and true to time, Harshie uncle was there. He introduced himself like a thorough gentleman, and just started chatting with me about my work, about his work, about Delhi, about Bombay, and suddenly, I was already a part of this family. I will always remember that moment.

For me, Harshie uncle will always be known for his lovely little anecdotes, his big heart and how his unconditional love and warmth made you feel special.

May his soul rest in peace.

I do share a similar story when I first met Harshie Mamaji at Sun n Sand hotel in Mumbai roughly 6 years back. He made Prarthna sign on the credit card slip instead of his name and then took me for a 10 minute walk on the beach where we chatted about my reasoning for settling in US vs. India. His demeanour indeed reflected a gentle and influential Captain and I can never forget our first meeting. This is an unbearable loss for our family and we all pray for him as he did for us. May god give him eternal rest!
– Sumit

I am at loss of words. Everyone’s memories of him reflect who he was – always full of conversations and warmth that made people comfortable in the very first meeting.

Going through all the pics and anecdotes the family is sharing, I still can’t believe he’s no more with us. I never saw Papaji – Harshie uncle was like a grandfather to me. He would drop me to school every day when he was posted in Delhi. After going back to Bombay, whenever he called he would ask me to do this “Bhangra” and I would put the phone on the side and do my little dance as if he were watching. On every trip to Delhi, he would book a “facial appointment” with me and we would talk for hours discussing his work, my career, he would give me math problems to solve – almost anything and everything under the sun. When I was in Bombay for my MBA, he never let me feel that I was away from family. Early every week, he would initiate a lunch/ dinner plan for the weekend and true to his nature would arrive half an hour early to pick me while I was rushing to get ready :). He was popular amongst all my friends as Harshie Uncle, who would take us to the fanciest of places 🙂

One thing that he would always say is that our generation lacks entrepreneurship. He would now be so proud how many of us have started our own ventures, and so successfully.

All the pics shared on this group reflect his unique style, personality and charm. He showered enough love on all of us that would last a lifetime…Love you Harshie Uncle.
– Prarthna

I was remembering Harshie mama, just a few days back. Dhruv had sent a video of a motorboat he had made and it reminded me of how mom would often talk about that Harshie mama, as a kid, used to make paper boat/s and then follow it all around the colony, floating in the rain water.
He was always a Man of the sea!
Sitting here so far away it has just not sunk in (no pun intended!), that he is no more…
– Parakh

Too many memories of Harshie mama. We were very close to him because mom was very close to her brothers. For mom he was her elder brother even though he was a year and a half younger to her. She was extremely proud of Harshie mama, infact proud of all three brothers. A disciplined man, always spoke positive things, never heard any negative comments. A very proud father and never missed an opportunity to mention Amit in his conversations and totally dependent on Manju mami for everything. As kids we were often asked to write essays, perhaps his way of keeping us busy. He had an excellent career both as a navy man and then as a business man. He will be remembered and will be in our hearts forever.

We have such beautiful memories of a very kind soul indeed. Harshie mama, you will always be remembered, loved and cherished. Take care everyone. Love you and miss you all.
– Nidhi

Beautiful memories and lively old pictures, thanks for sharing everyone.
It started to sink in more this afternoon and especially while reading whatsapp messages just now – the best writer of the group, who always described even the smallest gesture, provided elaborate details and was always positive in every conversation with such a unique style, isn’t here with us.
We will all miss you a lot Harshie Mama.
– Rachit

Thank you all for sharing your memories and pictures and for contributing to a fitting memorial for Harshie uncle. I wish I could have been there. It’s still hard to feel real from over here. Over the past couple of years, he’s been regularly chatting with a couple of my friends that he met through Facebook and we were counting on finally meeting at Kanika’s wedding. He sent a photo taken with friends he’d also known since he was a teenager.
– Aikta

5 thoughts on “A tribute to Harshie uncle…”